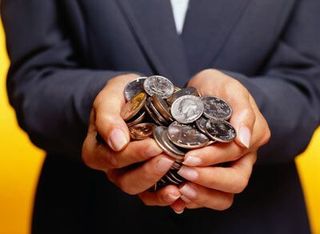 It's hard to imagine anything by Michael Jackson being worth a mere $2,105. A battle is brewing between the IRS and the estate, and it may result in changes to celebrity estate planning.

If his career wasn't big enough, since dying unexpectedly in 2009, Michael Jackson has experienced a huge surge in popularity and sales—due in equal parts to his oversized talents and the savvy executors managing his assets. Despite his death, documentaries, tribute shows, albums, video games, and many other memorial merchandising are all selling in the millions.

But now the IRS wants its share, arguing that the value of Jackson's name and image upon death amounted to more than $434 million. What did the estate say was the valuation? Just $2,105.

The Hollywood Reporter says in its recent article, "Michael Jackson Estate Faces Billion-Dollar Tax Court Battle," that with interest and penalties, lawyers estimate the case—which is scheduled for trial in 2017—could be worth more than $1 billion. Some tax specialists even wonder if there could be criminal tax evasion charges. The outcome could affect celebrity estate planning.

What matters most for tax purposes is the value of Jackson's name and likeness at the time of his death—not in the present day, after his executors have worked their magic.

Adam Streisand, a probate attorney who has worked with celebrity estates such as those of Ray Charles, Marlon Brando and Marilyn Monroe, thinks the IRS won't to be able to point to other celebrities' post-death earnings as part of the valuation process. But then again, this is the first time the IRS is pursuing estate taxes for name and likeness.

Ultimately, it's hard to know how something like the "Jim Croce effect"—referring to the singer who died in an airplane crash in 1973 and standing for the proposition that many entertainers are worth more dead than alive—will factor. A judge's valuation could center on what licensors were willing to pay to be associated with Jackson, not what he actually received in sponsorship and merchandise deals.

Probate attorney Streisand actually helped write the law that gives celebrity estates rights to their names and images, which has been a memorial gold mine to spouses and children. However, these high profits are a magnet for the IRS. If a star's name and image are tangible property with value, they become taxable assets, and the value for celebrities of this stature will always be enormous.

To learn how the IRS can impact your estate without proper planning, please visit our website.